Gas is also part of the effort to reduce CO2 emissions from transport. International manufacturers continue to rely on gas as an alternative fuel for cars and trucks.

Natural gas in particular is a fuel with great potential. Natural gas is used as a fuel both in gaseous form (CNG, “Compressed Natural Gas”) and in liquid form (LNG, “Liquified Natural Gas”). Compared to gasoline, its combustion produces 10 to 20 percent less CO2. In addition, natural gas causes significantly lower nitrogen oxide and particle emissions. However, to date only a comparably small number of natural gas passenger cars have been on the road in Germany. At the end of 2019, around 82,000 vehicles were registered. However, the interest of car buyers has clearly decreased: 7,600 CNG passenger cars were newly registered in 2019, after almost 11,000 in the previous year.

The low fuel costs also speak in favour of natural gas. Until the end of 2023, a lower energy tax rate will apply. Measured in terms of energy content, only 1.39 cents per kilowatt hour will be charged. For diesel, this compares to around 4.8 cents. Due to the low tax rate and low fuel consumption, natural gas passenger cars are particularly economical to drive. With a compact natural gas car, 100 kilometres only cost around 5 euros. A comparable diesel car costs about 6.50 euros, a petrol car about 8.40 euros. The purchase price of modern CNG passenger cars is usually between petrol and diesel.

There are currently around 850 filling stations in Germany where natural gas is available. This means that there is by far a sufficient, almost nationwide network. There are over 3000 natural gas filling stations throughout Europe. As CNG passenger cars usually also have a small petrol tank, they can also be operated with petrol for short to medium distances in case of emergency.

The already existing CO2 advantage of fossil natural gas can be further increased with biogas. It is obtained from biomass and can easily be used as a fuel due to its chemical composition, which is identical to natural gas. It is sold at existing natural gas filling stations via the gas feed and replaces or supplements fossil natural gas. Although biogas is theoretically climate-neutral, CO2 is still produced during production. The Biofuel Sustainability Directive therefore requires producers to prove that they avoid greenhouse gases by at least 35 percent and in future by 60 percent. 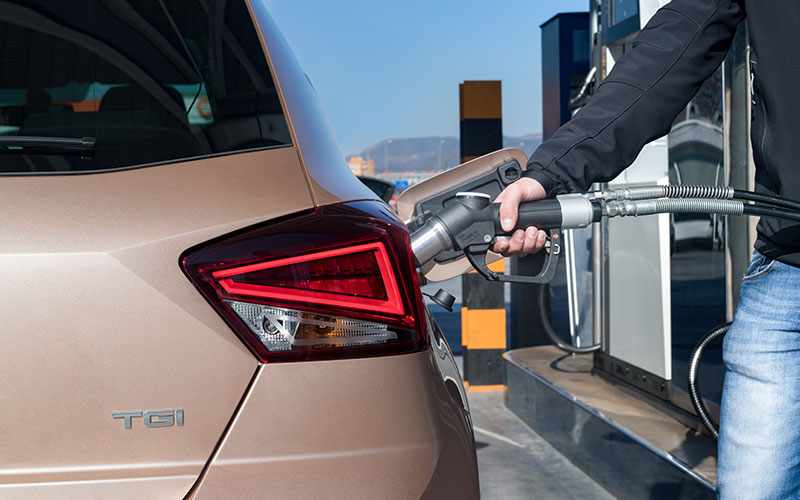 The use of climate-neutral biogas or synthetic gas, which can be increased at will, offers enormous potential for reducing CO2 emissions. Natural gas can thus make a significant contribution to achieving the ambitious climate targets. For this reason, the German government should create long-term planning security for gas through clear funding conditions. In this way, the further expansion of the filling station infrastructure can also be supported.

In addition, there are around 400,000 passenger cars with LPG drives in Germany. The abbreviation LPG stands for “Liqified Petroleum Gas”. LPG consists mainly of propane and butane, which are liquid at room temperature and relatively low pressure. They are by-products of natural gas and oil production. As a fuel, LPG, similar to natural gas, offers the possibility of significantly reducing fuel costs compared to petrol and diesel. Some vehicles with LPG drive can be ordered ex works. Passenger cars with gasoline engines are also frequently converted to LPG. LPG is available at around 7,100 filling stations in Germany. More than 30,000 filling stations throughout Europe offer LPG.

From the field of Alternative drivetrains